More than 80 guests attended an event at the International Culinary Center in SoHo New York City on June 15th to celebrate the recent publication of the autobiography of noted businessman and philanthropist, Walter J. Scherr, says The Center for Discovery in their post event newsletter.

The center said that …

Walter’s Way is the incredible story of his rise from a patient with tuberculosis who goes on to start several highly successful businesses and who ultimately gets introduced to The Center for Discovery where he donates millions of dollars in support of caregivers.

The 91 year old Scherr spent several years writing the book, which contains a special insert about The Center for Discovery, and underwrote all the expenses associated with its production and printing. He has generously directed that 100% of its proceeds go directly to support The Center and its mission of caring for those with complex conditions. 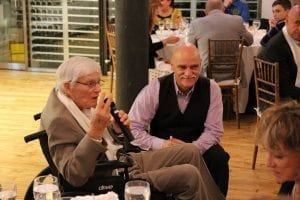 Patrick H. Dollard paid tribute to Walter during the dinner noting his remarkable generosity to The Center over the years which has included support of the Vera and Walter Scherr Scholarship Program, to support of the endowment fund and land acquisition as well as the family’s recent gift to help create the Maker’s Lab and Learning Center located on Main Street in Hurleyville, NY.

“His experience as a TB patient didn’t break him. It made him” Dollard noted. The event was
attended by members of Walter’s family, the Board of Directors, as well as friends and supporters
of The Center.

During his inspiring remarks that evening, Walter challenged all those associated with The Center
– especially the family members, employees, business partners and others – to join with him in
the effort to promote the book in order to raise financial support for The Center for Discovery.

“I put my heart into that book, and now it is up to you to ensure that it benefits Discovery!”

The book is an exceptional story filled with his wit, his wisdom and his enormous compassion to
honor the caregivers of this world. Copies are available through the Development Office for
$29.95 or by calling (845) 707-8504, and also can be purchased on Amazon.com.

Read more about the release party