Walter’s life experience in Chapter 5 brought him to Japan where he encountered the cultural differences. it was also a time of the “Whiz Kids,” Litton, and geisha’s. The Q & A section extracts pertinent information from each chapter of his life and presents it as questions and answers.

Q. Who are the “Whiz Kids”?
A. A group of young men, hand-picked by Tex Thornton (later Walter’s boss at Litton Industries), who revolutionized decision making and accountability at the Department of Defense during World War II and became key figures in reshaping post-war America.

Q. What was the new machine that Litton had worldwide rights to distribute?
A. The press fax.

Q. What were some cultural differences that Walter noticed in Japan?
A. When Japanese businessmen nodded, they were indicating that they understood what was being said, not that 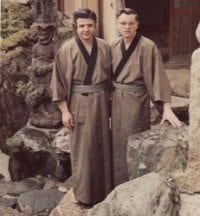 they agreed with the speaker’s statement; Sunday was family day, and the parks were filled with parents and children; strangers would go out of their way to help Westerners find their way when they were confused or lost.

Q. What is a geisha?
A. One of an elite group of women who had spent years learning traditional Japanese dances and music, as well as the art of conversation, in order to provide entertainment and companionship to gentlemen who were members of exclusive dining clubs.

Q. What did Mother Teresa tell Walter’s group in Calcutta?
A. “You don’t always have to succeed, but you have to try.”

Q. Mother Teresa’s words helped shape Walter’s life purpose. Who or what has influenced you to find your life mission?