Walter’s life experience in Chapter 7 took expanded his entrepreneurial zeal in dealing with the a large Japanese corporation. It also took him to the East German border where he was mistaken as a spy. The Q & A section extracts pertinent information from each chapter of his life and presents it as questions and answers.

Q. What key value did Walter and David Rockefeller, Jr. share?
A. The belief that nothing was more important in life than having a close circle of family and friends.

Q. Walter felt that he had a close relationship with many of the executives at the Matsushita Company in Japan. What was the Japanese phrase he used to describe it?
A. Shinyu – best friend

Q. When Walter was in Germany visiting a major equipment operator, he decided that he would 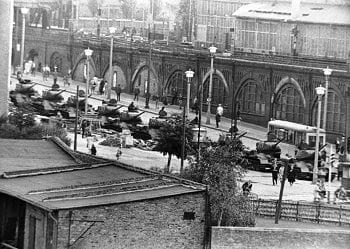 drive to the Netherlands to talk to the division head so they could become a partner of Visual Sciences. Where did Walter end up?
A. The East German border, where he was surrounded at gunpoint by guards and locked in a shack for many hours until they decided that he was not an American spy.

Q. When Walter entered into a new business agreement with Matsushita, what name was given to the American branch of their company?
A. Panafax

Q. Who was the infamous lawyer who helped Walter navigate a settlement with Matsushita?
A. Roy Cohn. A controversial figure, he was considered a crook by many and was eventually disbarred, but The New York Times described him in his obituary as “a ferociously loyal advocate.”

Q. Walter completely trusted Matsushita and didn’t realize that they were plotting to undermine him and Panafax. The subsequent lawsuit between Panafax and Matsushita threatened to bankrupt him and his partners, and almost destroyed Panafax. What roles do trust and loyalty play in both business and personal life? Are they or should they ever be intertwined?