It’s been a long and well-traveled road leading up to the writing and release of Walter Scherr’s memoir, WALTER’S WAY. The “Walter’s Way” book release is June 15th. 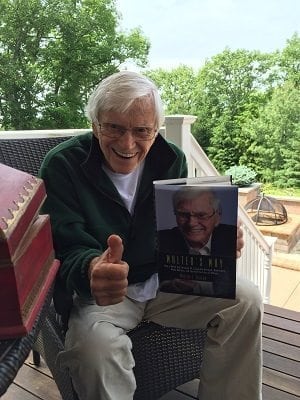 A career businessman, family man, and later in life a philanthropist,  as a young man, like others in his neighborhood Walter raced to enlist in World War II to support his country. However, he was diagnosed with Tuberculosis, and sent to a TB sanitarium where he subsequently spent the next six years of his life.

He overcame obstacles at every turn, rising up to be a leader in corporate America.

He was an innovator at the forefront of what would become the tech boom of the 1990s with the introduction — as founder and principal — of the first publicly-traded facsimile company.

He has traveled millions of miles, visiting over 40 countries, and meeting people like Mother Teresa, who in no small part was the catalyst of his focus in later life to support the caretakers.

At 90 years old he wrote his story in his autobiography (Walter’s Way), which is being published by Wiley, the publisher that has been around since the turn of the 19th century. The official release of the book is June 15th, when Walter will celebrate these achievements with friends, family and supporters at an invitation-only book party in New York City.